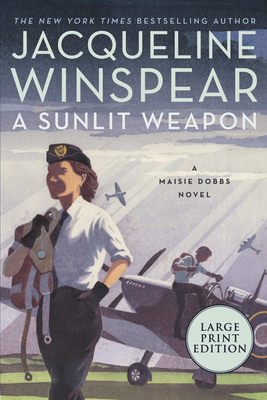 October 1942. Jo Hardy, a 22-year-old ferry pilot, is delivering a Supermarine Spitfire—the fastest fighter aircraft in the world—to Biggin Hill Aerodrome, when she realizes someone is shooting at her aircraft from the ground. Returning to the location on foot, she finds an American serviceman in a barn, bound and gagged. She rescues the man, who is handed over to the American military police; it quickly emerges that he is considered a suspect in the disappearance of a fellow soldier who is missing.

Tragedy strikes two days later, when another ferry pilot crashes in the same area where Jo’s plane was attacked. At the suggestion of one of her colleagues, Jo seeks the help of psychologist and investigator Maisie Dobbs.  Meanwhile, Maisie’s husband, a high-ranking political attaché based at the American embassy, is in the thick of ensuring security is tight for the first lady of the United States, Eleanor Roosevelt, during her visit to the Britain. There’s already evidence that German agents have been circling: the wife of a president represents a high value target. Mrs. Roosevelt is clearly in danger, and there may well be a direct connection to the death of the woman ferry pilot and the recent activities of two American servicemen.

To guarantee the safety of the First Lady—and of the soldier being held in police custody—Maisie must uncover that connection. At the same time, she faces difficulties of an entirely different nature with her young daughter, Anna, who is experiencing wartime struggles of her own.

Jacqueline Winspear is the author of the New York Times bestsellers The Consequences of Fear, The American Agent, To Die but Once, In This Grave Hour, Journey to Munich, A Dangerous Place, Leaving Everything Most Loved, and Elegy for Eddie, as well as eight other bestselling Maisie Dobbs novels. Her standalone novel, The Care and Management of Lies, was also a New York Times bestseller, and a finalist for the Dayton Literary Peace Prize. Winspear has won numerous prizes, including the Agatha, Alex, and Macavity awards for the first book in the series, Maisie Dobbs, which was also nominated for the Edgar Award for Best Novel and was named a New York Times Notable Book. Originally from the United Kingdom, she lives in California.

“Over 16 novels spanning three decades, Winspear’s Maisie Dobbs has lived. In real life, her quiet bravery, compassion and dogged pursuit of the truth would have made her one of the Greatest Generation, a lesson in survival under the grimmest circumstances. The lessons are hard-won in The Consequences of Fear, set in the fall of 1941 but no less relevant today…. Fans and newcomers to the series will root for Dobbs and the other well-drawn characters.”
— Los Angeles Times on The Consequences of Fear

“Outstanding…. Maisie and her loving family of supporting characters continue to evolve and grow in ways sure to win readers’ hearts. Winspear is writing at the top of her game.”
— Publishers Weekly, starred review on The Consequences of Fear

“Fast-paced… Winspear never sugarcoats the horrors of war, and alongside the camaraderie shown by these characters and the Londoners surrounding them deliver terrible truths that must be endured…. also recommend it as a less- weighty read-alike for Anthony Doerr’s All the Light We Cannot See.”
— Booklist, starred review on The Consequences of Fear

"A fast-paced tale of mystery and spycraft whose exploration of inner doubts and fears makes it much more."
— Kirkus on The Consequences of Fear