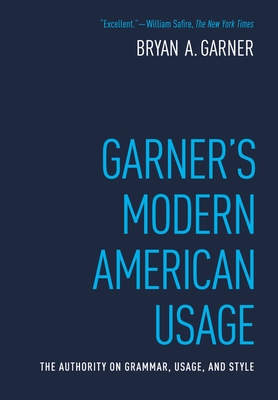 By Bryan Garner
Email or call for price
Out of Print

Since first appearing in 1998, Garner's Modern American Usage has established itself as the preeminent guide to the effective use of the English language. Brimming with witty, erudite essays on troublesome words and phrases, this book authoritatively shows how to avoid the countless pitfalls that await unwary writers and speakers whether the issues relate to grammar, punctuation, word choice, or pronunciation. Now in the third edition, readers will find the Garner's Language-Change Index, which registers where each disputed usage in modern English falls on a five-stage continuum from nonacceptability (to the language community as a whole) to acceptability, giving the book a consistent standard throughout. Garner's Modern American Usage, 3e is the first usage guide ever to incorporate such a language-change index, and the judgments are based both on Garner's own original research in linguistic corpora and on his analysis of hundreds of earlier studies. Another first in this edition is the panel of critical readers: 120-plus commentators who have helped Garner reassess and update the text, so that every page has been improved.

Bryan Garner is the award-winning author or editor of more than 20 books. He is a prolific lecturer, having taught more than 2,500 writing workshops since the 1991 founding of his company, LawProse, Inc. His works include Garner on Language and Writing and Making Your Case: The Art of Persuading Judges, co-written with Justice Antonin Scalia. Garner has served as editor-in-chief of Black's Law Dictionary since 1995, and he is the author of the grammar-and-usage chapter in the venerable Chicago Manual of Style.