We Lie with Death (The Reborn Empire #2) (Paperback) 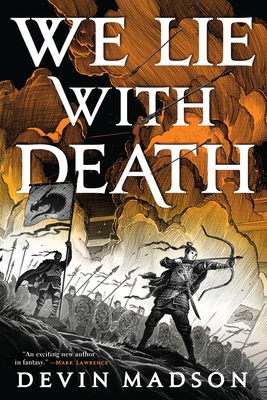 This is book number 2 in the The Reborn Empire series.

War rages as one empire falls and another rises in its ashes in the action-packed sequel to Devin Madson's bold epic fantasy, We Ride the Storm.

There is no calm after the storm.

In Kisia's conquered north, former empress Miko Ts'ai is more determined than ever to save her empire. Yet, as her hunt for allies grows increasingly desperate, she may learn too late that power lies not in names but in people.

Dishiva e'Jaroven is fiercely loyal to the new Levanti emperor. Only he can lead them, but his next choice will challenge everything she wants to believe about her people's future.

Abandoned by his Second Swords, Rah e'Torin must learn to survive without a herd. But honor dictates he bring his warriors home-a path that could be his salvation or lead to his destruction.

And sold to the Witchdoctor, Cassandra Marius' desperate search for a cure ties her fate inextricably to Empress Hana and her true nature could condemn them both.

Get swept into the thrilling continuation of a bold and brutal epic fantasy series, perfect for readers of Mark Lawrence, John Gwynne, and Brian Staveley.

Praise for The Reborn Empire:

"Imaginative worldbuilding, a pace that builds perfectly to a heart-pounding finale and captivating characters. Highly recommended." —John Gwynne, author of The Shadow of the Gods

"A complex tale of war, politics, and lust for power." —The Guardian

For more from Devin Madson, check out:

Devin Madson is an Aurealis Award-winning fantasy author from Australia. After some sucky teenage years, she gave up reality and is now a dual-wielding rogue who works through every tiny side-quest and always ends up too over-powered for the final boss. Anything but zen, Devin subsists on tea and chocolate and so much fried zucchini she ought to have turned into one by now. Her fantasy novels come in all shades of grey and are populated with characters of questionable morals and a liking for witty banter.

"With prose that rises above most novels, Devin Madson paints evocative scenes to build an engaging story. Highly entertaining, We Ride the Storm is certainly worth your attention and Madson is an exciting new author in fantasy."—Mark Lawrence, author of Red Sister

"Intricate, compelling and vividly imagined, this is the first in a new quartet that I am hugely excited about. Visceral battles, complex politics and fascinating worldbuilding bring Devin's words to life."—Anna Stephens, author of Godblind on We Ride the Storm

"Fans of George R. R. Martin's Song of Ice and Fire series will appreciate the feudal political maneuvering, shifting alliances, and visceral descriptions of combat and its aftermath in this series starter."—Booklist on We Ride the Storm

"A complex tale of war, politics and lust for power."—The Guardian on We Ride the Storm

"An utterly arresting debut,Storm's heart is in its complex, fascinating characters, each trapped in ever tightening snarls of war, politics and magic. Madson's sharp, engaging prose hauls you through an engrossing story that will leave you wishing you'd set aside enough time to read this all in one sitting. One of the best new voices in fantasy."—Sam Hawke, author of City of Lies on We Ride the Storm

"Darkly devious and gripping epic fantasy boasting complex characters, brutal battle and deadly intrigue. We Ride the Storm is breathtaking, brilliant and bloody -it grips you hard and does not let go."—Cameron Johnston, author of The Traitor God

"A brutal, nonstop ride through an empire built upon violence and lies, a story as gripping as it is unpredictable. Never shying away from the consequences of the past nor its terrible realities, Madson balances characters you want to love with actions you want to hate while mixing in a delightful amount of magic, political intrigue, and lore. This is not a book you'll be able to put down."—K. A. Doore, author of The Perfect Assassin on We Ride the Storm

"Madson has built a living, breathing world of Empire and fury. We Ride The Stormgrabs you by the throat and doesn't let go."—Peter McLean, author of Priest of Bones