The Outsider: The Classic Exploration of Rebellion and Creativity (Tarcher Cornerstone Editions) (Paperback) 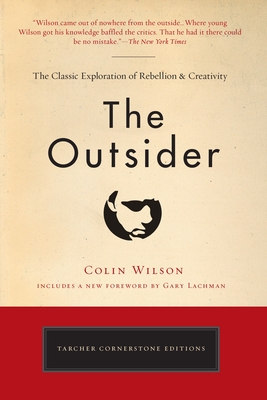 Colin Wilson's classic exploration of the rebel as genius, with a new introduction by Gary Lachman.

When the upstart English writer Colin Wilson debuted on the literary scene with The Outsider in 1956, it marked one of the opening notes of the cultural revolution of the sixties. Wilson celebrated the misfit not as a figure be "fixed" and reintegrated into society, but as a lone journeyer who often had a stirring artistic, political, or spiritual innovation to convey to society.

Wilson lived this book as much as wrote it. As an impoverished 23-year-old, the Englishman slept in a tent in a London park so that he could be free of material demands to dedicate himself fully to his study. When The Outsider appeared in 1956, it became a sensation among both critics and beats, who formed the vanguard of the dawning Aquarian Age.

In Wilson's epic exploration of mystics, visionaries, literary pioneers, political troublemakers, and rule breakers of all sorts, he evoked a new kind of heroism, which changed how we view ourselves and our purpose in life.

The Outsider is now reissued and reset in a beautiful Tarcher Cornerstone Edition, with a new introduction by Wilson's friend and biographer, Gary Lachman. This new volume coincides with Tarcher's publication of Lachman's biography of Wilson, Beyond the Robot.

Born to a working class English household in 1931, Colin Wilson went from being the "bad boy" of the British literary scene to becoming a wide-ranging historian, novelist, critic, and philosopher. In addition to his classic study of rebellion, The Outsider, Wilson distinguished himself as one of the most prolific and grounded historians of occult and esoteric movements. A rebel until the end, Wilson later in life wrote stirring intellectual defenses of optimism, challenging the dark vogue of figures such as Bertolt Brecht and Samuel Beckett. He died in Cornwall, England, in late 2013.

"An exhaustive, luminously intelligent study...a real contribution to our understanding of our deepest predicament." —Philip Toynbee

"The newest prodigy on the English literary scene, Mr. Wilson came out of nowhere from the outside. He walked into literature...as a man walks into his own house ... filled with assimilated erudition ... Where young Wilson got his knowledge baffled the critics. That he had there could be no mistake." —The New York Times