Odysseus in America: Combat Trauma and the Trials of Homecoming (Paperback) 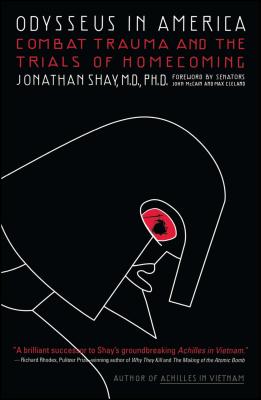 In this ambitious follow-up to Achilles in Vietnam, Dr. Jonathan Shay uses the Odyssey, the story of a soldier's homecoming, to illuminate the pitfalls that trap many veterans on the road back to civilian life.

Seamlessly combining important psychological work and brilliant literary interpretation with an impassioned plea to renovate American military institutions, Shay deepens our understanding of both the combat veteran's experience and one of the world's greatest classics.

Jonathan Shay is a Boston-area psychiatrist whose patients are Vietnam combat veterans with severe, chronic post-traumatic stress disorder in the Department of Veterans Affairs Outpatient Clinic. He is also on the faculty of Tufts Medical School. He lives in Cambridge, Massachusetts.

Senator John McCain (1936—2018) entered the Naval Academy in June of 1954. He served in the United States Navy until 1981. He was elected to the US House of Representatives from Arizona in 1982 and to the Senate in 1986. He was the Republican Party’s nominee for president in the 2008 election. He is the author of Faith of My Fathers, Worth Fighting For, Why Courage Matters, Character Is Destiny, Thirteen Soldiers, and The Restless Wave.

Richard Rhodes Pulitzer Prize-winning author of Why they Kill and The Making of the Atomic Bomb A brilliant successor to Shay's groundbreaking Achilles in Vietnam.

Library Journal [A] fresh take on a literary classic.

Thomas E. Ricks Defense correspondent, The Washington Post Should be read by anyone interested in the effects of combat on troops or in the meaning of Homer's works -- and by everyone who wants to better understand today's United States.

Asa Baber Vietnam-era marine veteran and the Men columnist for Playboy One hell of a book. It is well written, honest, healing, and aimed at all of us who have trouble handling the stress of our crazy world.

Steven Pressfield Author of Gates of Fire and Last of the Amazons Jonathan Shay plumbs the Odysseus myth for healing, working the real-life agonies of his own clients at the V.A. in Boston into the wisdom left to us by Homer. An important book.

Lieutenant General Bernard E. Trainor USMC, retired, Marine Corps Gazette Groundbreaking work in understanding, preventing, and treating mental injuries....Leaders at all levels would profit from a journey with both Achilles and Odysseus. Homer and Jonathan Shay are excellent tour guides.