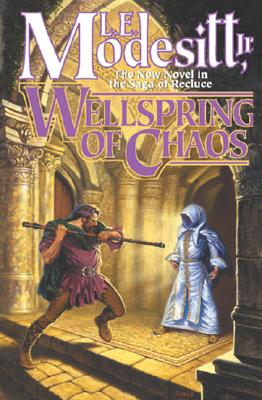 Kharl is the best cooper in Brysta, one of the major cities in Nordla, and his life has been as ordered and dependable as his barrels. His trouble begins when he saves a neighbor's daughter from the violent advances of two upper-class men. Then he rescues an actual rape victim he finds unconscious in an alley, a blackstaffer -- a young expatriate mage -- from Recluce, and that makes his wife very uneasy. The culprit in both cases turns out to have been Egen, the cruel and corrupt son of the local ruler. When the blackstaffer is mysteriously murdered in Kharl's cooperage, Kharl is jailed, tried, and flogged, and in a shocking turnaround released--and his consort executed for the murder, which she did not commit. Egen again. Kharl ends up on the run, with just a handful of coins and a few clothes, but he also takes the slain woman's black staff and her book, The Basis of Order, which explains the principles of its power. The diligent cooper is about to learn a new, very different skill.

Wellspring of Chaos is the twelfth book in the Recluce Saga and takes place roughly 60 years after the close of The Order War (Recluce #4). It is Modesitt at the top of his form, returning to his most famous fantasy world, yet does not require previous knowledge of Recluce to be enjoyed. It's publication is sure to be one of the fantasy milestones of the year.

L. E. Modesitt, Jr., is the author of the popular fantasies of the Recluce, Spellsinger and Corean series as well as numerous science fiction novels. He lives with his wife, a lyric soprano, in Cedar City, Utah.