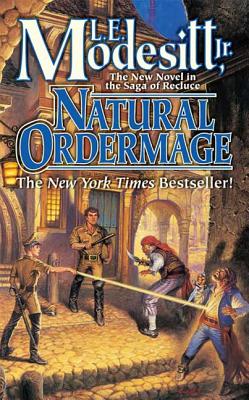 By Jr. Modesitt, L. E.
Email or call for price
Out of Print

This is book number 14 in the Saga of Recluce series.

L.E. Modesitt, Jr.'s Natural Ordermage continues his bestselling fantasy series the Saga of Recluce, which is one the most popular in contemporary epic fantasy.

Rahl, a young apprentice scrivener, likes life to work out in his favor. To make sure things go his way, he uses a small amount of order magic in opportunistic moments—but his abilities gains the attention of the Council magisters. Rahl's misuse of his strengthening abilities gets him banished to the empire of Hamor.

As an exile in Hamor, working in the Ordermage Council's import and export business, Rahl's powers increase more—and so does the amount of trouble he can get into.

“Recluce fans may well devour this book at one sitting, and eagerly await its sequel.

“Modesitt renders the people and places of Recluce and Hamor . . . with diligent attention to detail.” —Publishers Weekly


“Can be enjoyed as a stand alone novel. Readers new to Recluce as well as fans of the series will both enjoy this tale.” —SFRevu