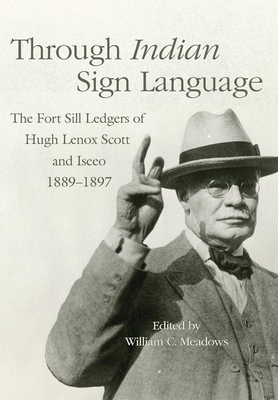 
Hugh Lenox Scott, who would one day serve as chief of staff of the U.S. Army, spent a portion of his early career at Fort Sill, in Indian and, later, Oklahoma Territory. There, from 1891 to 1897, he commanded Troop L, 7th Cavalry, an all-Indian unit. From members of this unit, in particular a Kiowa soldier named Iseeo, Scott collected three volumes of information on American Indian life and culture--a body of ethnographic material conveyed through Plains Indian Sign Language (in which Scott was highly accomplished) and recorded in handwritten English. This remarkable resource--the largest of its kind before the late twentieth century--appears here in full for the first time, put into context by noted scholar William C. Meadows. The Scott ledgers contain an array of historical, linguistic, and ethnographic data--a wealth of primary-source material on Southern Plains Indian people. Meadows describes Plains Indian Sign Language, its origins and history, and its significance to anthropologists. He also sketches the lives of Scott and Iseeo, explaining how they met, how Scott learned the language, and how their working relationship developed and served them both. The ledgers, which follow, recount a variety of specific Plains Indian customs, from naming practices to eagle catching. Scott also recorded his informants' explanations of the signs, as well as a multitude of myths and stories. On his fellow officers' indifference to the sign language, Lieutenant Scott remarked: "I have often marveled at this apathy concerning such a valuable instrument, by which communication could be held with every tribe on the plains of the buffalo, using only one language." Here, with extensive background information, Meadows's incisive analysis, and the complete contents of Scott's Fort Sill ledgers, this "valuable instrument" is finally and fully accessible to scholars and general readers interested in the history and culture of Plains Indians.