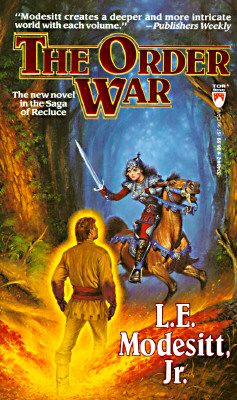 The saga of Recluce, launched in The Magic of Recluce and continuing in The Towers of the Sunset and The Magic Engineer reaches a new climax in The Order War. "Modesitt has created an exceptionally vivid world," says L. Sprague de Camp, "so concretely visualized as to give the impression that Modesitt himself must have dwelt there." Publishers Weekly says, "Modesitt creates a complex world bgased on a plausible system of magic and peopled with engaging and realistic characters."

Set after the events of The Magic Engineer (and prior to The Magic of Recluce) The Order War illuminates great figures and major events in the historic war between order and chaos that is the central focus of the saga of Recluce.

The deadly White Wizards of Fairhaven, wielding the forces of chaos, have completed their great highway through the Westhorns and now threatened the ancient matriarchy of Sarronnyn, the last bastion of order in Candar. The ruler of Sarronnyn appeals to the Black order wizards of Recluce for help.

Justen - a young Black Engineer in the city of Nylan - joins the relief force. Despite their success in destroying more than half the White armies, Sarronnyn falls to the White Wizards, and Justen is chased into the most inhospitable desert in Candar. These trials are but the beginning, for the White Wizards have all Candar in their grasp. Justen must fight both Recluce and Fairhaven, as well as the highest powers of order and the forbidden technology to harness chaos itself in his efforts to halt the conquest of the chaos wizards.

The Order War is the fourth book of the saga of Recluce.

L. E. Modesitt, Jr., is the bestselling author of the fantasy series The Saga of Recluce, Corean Chronicles, and the Imager Portfolio. His science fiction includes "Adiamante," the Ecolitan novels, the Forever Hero Trilogy, and "Archform: Beauty." Besides a writer, Modesitt has been a U.S. Navy pilot, a director of research for a political campaign, legislative assistant and staff director for a U.S. Congressman, Director of Legislation and Congressional Relations for the U.S. Environmental Protection Agency, a consultant on environmental, regulatory, and communications issues, and a college lecturer. He lives in Cedar City, Utah.

"In this fourth tale set in Modesitt's universe, where good and evil, chaos and order, are in perpetual conflict, a young wizard finds that his destiny is to strike a balance, but at considerable personal cost." --Publishers Weekly