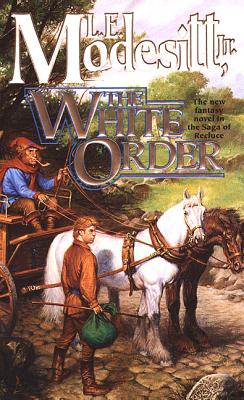 By L. E. Modesitt, Jr.
Email or call for price
Out of Print

This is book number 8 in the Saga of Recluce series.

L.E. Modesitt, Jr.'s The White Order continues his bestselling fantasy series the Saga of Recluce, which is one the most popular in contemporary epic fantasy.

Raised by his aunt and uncle, Cerryl learns that he has inherited his father's magic abilities. His abilities do not protect him, however. When Cerryl witnesses a white mage destroy a renegade magician, he must sent to the city of Fairhaven for his own safety and to find his destiny.

“Return to this disciplined and uncompromising world of fantasy. You will not be disappointed.” —Realms of Fantasy

“Another entry in Modesitt's popular Recluce series, one that upholds the saga's reputation for intelligence and increasing originality....This volume in the series stands unusually well on its own as a classic and competent coming-of-age story.” —Booklist