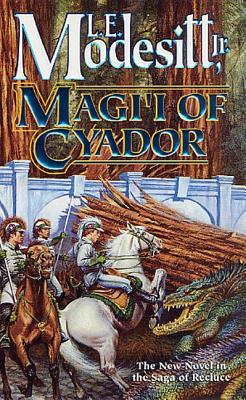 By Jr. Modesitt, L. E.
Email or call for price
Out of Print

This is book number 10 in the Saga of Recluce series.

L.E. Modesitt, Jr.'s Magi'i of Cyador continues his bestselling fantasy series the Saga of Recluce, which is one of the most popular in contemporary epic fantasy.

A diligent student of remarkable talent, Lorn lacks only the single most coveted attribute required of a Magus of Cyador: unquestionable loyalty. Too independent for his own good, Lorn is forced to become a lancer officer, and is sent to the frontier to fight off the all-too-frequent barbarian raids—a career that comes with a 50% mortality rate. His enemies don't expect him to survive . . .

“The bzyantine nature and political scheming of a declining empire are wonderfully woven into the most compelling of tales.” —Romantic Times