Remembering the Kanji 1: A Complete Course on How Not to Forget the Meaning and Writing of Japanese Characters (Paperback) 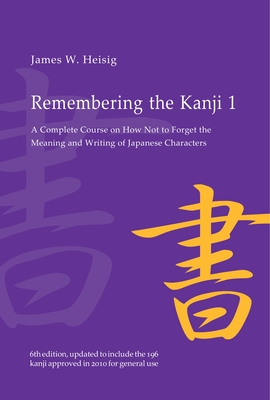 Updated to include the 196 new kanji approved by the Japanese government in 2010 as "general-use" kanji, the sixth edition of this popular text aims to provide students with a simple method for correlating the writing and the meaning of Japanese characters in such a way as to make them both easy to remember. It is intended not only for the beginner, but also for the more advanced student looking for some relief from the constant frustration of forgetting how to write the kanji, or for a way to systematize what he or she already knows.

The author begins with writing the kanji because--contrary to first impressions--it is in fact simpler than learning how to the pronounce them. By ordering the kanji according to their component parts or "primitive elements," and then assigning each of these parts a distinct meaning with its own distinct image, the student is led to harness the powers of "imaginative memory" to learn the various combinations that make up the kanji. In addition, each kanji is given its own key word to represent the meaning, or one of the principal meanings, of that character. These key words provide the setting for a particular kanji's "story," whose protagonists are the primitive elements. In this way, one is able to complete in a few short months a task that would otherwise take years. Armed with the same skills as Chinese or Korean students, who know the meaning and writing of the kanji but not their Japanese pronunciations, one is then in a much better position to learn the readings (which are treated in a separate volume). Remembering the Kanji has helped tens of thousands of students advance towards literacy at their own pace, and to acquire a facility that traditional methods have long since given up on as all but impossible for those not raised with the kanji from childhood.