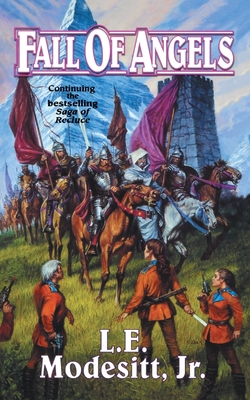 This is book number 6 in the Saga of Recluce series.

L.E. Modesitt, Jr.'s Fall of Angels continues his bestselling fantasy series the Saga of Recluce, which is one of the most popular in contemporary epic fantasy.

Nylan, an engineer and builder, plans to raise a great tower on the plateau known as the Roof of the World. Here, he and the exiled women warriors will live and survive to fulfill their destiny, spawning a revolutionary new society. But Nylan must learn to control his growing power in order to do so—before the lowland amies can obliterate them all.

“The latest novel in Modesitt's Recluce series is one of the best and most accessible for readers new to the saga....Will hold existing series fans and probably recruit some new ones.” —Booklist