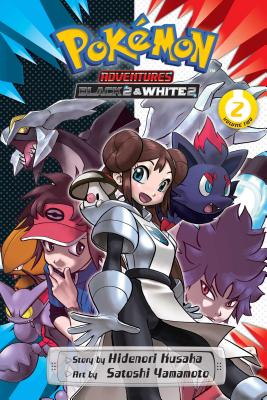 This is book number 2 in the Pokémon Adventures: Black 2 & White 2 series.

Two years have passed since Team Plasma was defeated and Trainer Black was sucked into the Light Stone along with Legendary Pokémon Reshiram… Now Team Plasma is back to its wicked ways, controlling other people’s Pokémon and even wild Pokémon with technology. Luckily, a new young hero and Looker of the International Police are on their trail…

Whitley is beginning to have feelings for Inspector Blake, but it seems all he cares about is figuring out if she is a Team Plasma spy planted at their school. A chorus tournament in Castelia City strikes some sour notes when the Seven Sages crash the event. And then, who will save Legendary Pokémon Kyurem from Team Plasma…?