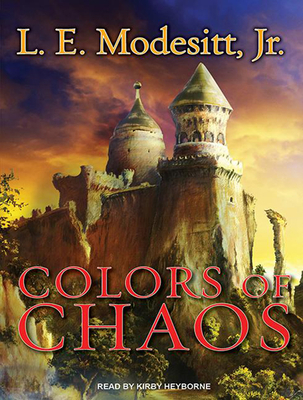 This is book number 9 in the Saga of Recluce (Audio) series.

Ceryl, now a full mage in The White Order, must prove himself indispensable to Jeslek, the High Wizard. Whether it be the threat of assassination, the effective governance of occupied territory, or the fearless and clever direction of troops in battle, Ceryl faces many harrowing obstacles, not the least of which is Anya, the plotting seductress who's the real power behind the scenes of the white wizards. With his wits, his integrity, and the support of his love, the Black healer Leyladin, he must survive long enough to claim his rightful spot within the ruling hierarchy of the White Order. Colors of Chaos is a must-listen for followers of the Saga of Recluce, offering a unique, sympathetic point of view of the White Chaos wizards-the forces that throughout history have opposed the magicians of Recluce.