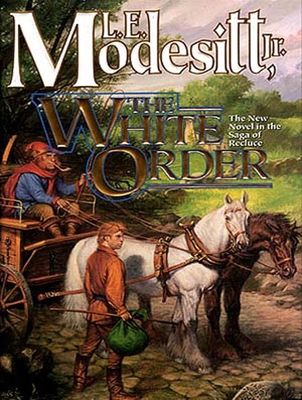 This is book number 8 in the Saga of Recluce (Audio) series.

L. E. Modesitt, Jr.'s bestselling fantasy novels set in the world of Recluce are among the most popular in contemporary fantasy. Rich in detail, Modesitt's Recluce books are a feast of wonderous marvels. The White Order is the story of Cerryl, a boy orphaned when the powerful white mages killed his father to protect their control of the world's magic. Cerryl, raised by his aunt and uncle, is a curious boy, attracted to mirrors and books, though he is unable to read. When he is old enough, Cerryl is apprenticed to the local miller. The miller's daughter teaches Cerryl to read his father's books, and it seems that the talent for magic has been passed from father to son. When Cerryl witnesses a white mage destroy a renegade magician, the miller realizes the boy will not be safe there, so Cerryl must be sent to the city of Fairhaven to find his destiny.