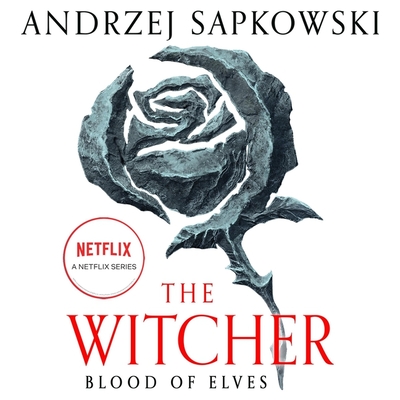 This is book number 3 in the Witcher series.

Watch for the signs What signs these shall be, I say unto you: first the earth will flow with the blood of Aen Seidhe, the blood of elves ...For over a century, humans, dwarves, gnomes, and elves have lived together in relative peace. But times have changed, the uneasy peace is over, and now the races are fighting once again. The only good elf, it seems, is a dead elf.Geralt of Rivia, the cunning assassin known as the Witcher, has been waiting for the birth of a prophesied child. This child has the power to change the world--for good or for evil.As the threat of war hangs over the land and the child is hunted for her extraordinary powers, it will become Geralt's responsibility to protect them all--and the Witcher never accepts defeat.Following The Last Wish, Blood of Elves stars Geralt of Rivia, the inspiration for the critically-acclaimed The Witcher video game series.