The Discomfort of Evening: A Novel (Paperback) 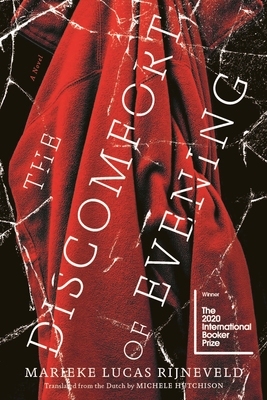 WINNER OF THE 2020 INTERNATIONAL BOOKER PRIZE

Ten-year-old Jas lives with her strictly religious parents and her siblings on a dairy farm where waste and frivolity are akin to sin. Despite the dreary routine of their days, Jas has a unique way of experiencing her world: her face soft like cheese under her mother’s hands; the texture of green warts, like capers, on migrating toads in the village; the sound of “blush words” that aren’t in the Bible.

One icy morning, the disciplined rhythm of her family’s life is ruptured by a tragic accident, and Jas is convinced she is to blame. As her parents’ suffering makes them increasingly distant, Jas and her siblings develop a curiosity about death that leads them into disturbing rituals and fantasies. Cocooned in her red winter coat, Jas dreams of “the other side” and of salvation, not knowing where this dreaming will finally lead her.

A bestseller in the Netherlands, Marieke Lucas Rijneveld’s radical debut novel The Discomfort of Evening offers readers a rare vision of rural and religious life in the Netherlands. In it, they ask: In the absence of comfort and care, what can the mind of a child invent to protect itself? And what happens when that is not enough? With stunning psychological acuity and images of haunting, violent beauty, Rijneveld has created a captivating world of language unlike any other.

Marieke Lucas Rijneveld grew up in a Reformed farming family in North Brabant before moving to Utrecht. She is also the author of two poetry collections. In addition to writing, Rijneveld works on a dairy farm.

“This is Rijneveld in short: an earthy and irreverent new voice, thrillingly uninhibited in style and subject matter. . . . The spaciousness of Rijneveld’s imagination comes as terror and solace. That lack of squeamishness, that frightening extremity, which, in Hutchison’s clean, calm translation, never feels showy or manipulative, gives full voice to the enormity of the children’s grief, their obscene deprivation.”—Parul Sehgal, The New York Times

“This childhood narrative of overwhelming grief, religious insanity, death and incest, cruelty and despair, is felt in the gut as much as it is in the heart. . . . The novel’s power resides not in its ability to stun, but rather in the compressed grace of the author’s plain style—lucidly conveyed by the translator Michele Hutchison—which conjures up a hermetically sealed reality and an adolescent protagonist so believable and unguarded that from the outset we feel her closeness and fear for her safety.”—The Wall Street Journal

“Impressive. . . . It is the strange, haunting observations through which the child, Jas, tries to make sense of the grown-up world that gives this novel of grief its particular power. A book to read—and to remember.”—The Economist

“The effects of the unspeakable grief felt by 10-year-old Jas’ family after the death of her beloved older brother are explored in painful and painstaking detail in this startling debut novel. . . . Rijneveld’s extraordinary narrator describes a small world of pain which is hard to look at and harder to ignore.”—Kirkus Reviews, starred review

“Rijneveld's International Booker Prize–shortlisted debut is not a novel for those expecting triumphal outcomes. Readers who can persist through the agonies of a family falling apart, however, will find their breath taken away by Rijneveld's prose as filtered through Hutchison's deft translation.“—Booklist, starred review

“Rijneveld’s head-turning debut, a bestseller in their native Netherlands and a Booker International Prize nominee, puts a contemporary spin on classic wrath-of-God literature. . . . the translation’s soaring lyricism offers mercy for the reader.”—Publishers Weekly

“An intensely raw, memorable debut . . . . There is a bold beauty to the book, which for all its modernity seems to be set in a different age of automatic religious belief: the immensity and mystery of the universe coexisting alongside the claustrophobic community of farm, church and school. By using Jas’s everyday world as a metaphor for loneliness and fear, Rijneveld has created something exceptional.”—Financial Times (UK)

“Remarkable. . . . Confident in its brutality, yet contained rather than gratuitous, [The Discomfort of Evening] introduces readers to both a memorably off-key narrator and a notable new talent.”—The Observer (UK)

“Thanks to a fine translation by Michele Hutchison, English readers can experience the novel's heady imagery and sensory language . . . . A visceral portrait of a devout family dealing with grief and the result is both haunting and beautiful.”—Monocle (UK)

“The electricity in this book comes from the use of that blank narrative style to deliver a sort of Grand Guignol grotesquerie.”—The Times (UK)

“Rijneveld’s language renders the world anew, revealing the shocks and violence of early youth through the prism of a Dutch dairy farm. The strangeness of a child looking at the strangeness of the world.”—International Booker Prize judges' citation

“A moving yet unsentimental reflection on solitude in the face of loss, nature, authority—and oneself. Rijneveld’s gorgeous, almost tactile prose brings to life, with unforgiving precision, the fears and fantasies haunting a wrecked childhood. A relentless, delicately devastating novel.”—Hernan Diaz

“One of the best debut novels I have ever read. Shockingly good. Utterly unforgettable. . . . It’s a classic.”—Max Porter

“Rijneveld takes us into the bleak Dutch countryside, into a family's grief, and inside the mind of a girl who is in hiding from her own life. This beautiful, strange novel is filled with sentences that stopped me dead.”—Chris Power