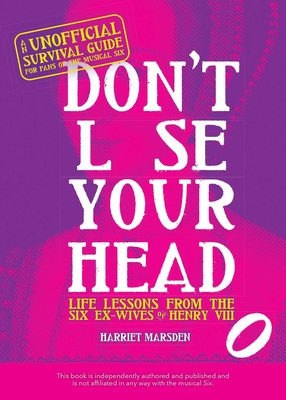 Survive alongside Catherine of Aragon, Anne Boleyn, and the rest of King Henry VIII’s ill-fated wives with this witty book of essential life advice, history, and trivia—the perfect handbook for fans of the hit musical Six.

Get the inside scoop from some of the toughest women in English history, as ex-wives, mothers, and daughters of King Henry VIII dish out all their survival secrets in this humorous guide to life. With a bit of sarcasm and friendly charm, each of these legendary ladies explains how their 16th-century hard-earned lessons (from living with unstable men to stifling Tudor traditions) apply to 21st-century dating, marriage, and feminism.

Written from the perspectives of each of the different women around Henry VIII, you’ll get the facts from the Queen Mother and the less-remembered but no less important Anne of Cleves, Katherine Howard, and more.

With must-know historical trivia alongside wise life advice, Don’t Lose Your Head is the perfect survival guide for fans obsessed with Broadway’s latest historical pop musical Six, as well as anyone fascinated by British royalty and culture.

Harriet Marsden is a freelance journalist and editor. Previously a subeditor at The Times, she now works for a variety of publications, including The Independent, HuffPost, the Guardian, and Foreign Policy. Harriet can often be heard on the radio at stupid o’clock, reviewing the news and mocking politicians. She is also a feminist commentator and contributing author to DK’s The Feminism Book. Hobbies include reading, swimming, and Broadway musicals (she can do all the raps from Hamilton). Harriet has a bachelor's in languages from the University of Cambridge and a master's in international journalism from City University, London. She lives in South London with a cat, two birds, and innumerable plants. This is her first novel. Harriet can be found tweeting at @harriet1marsden.