Champions of the Mortal Realms (Warhammer: Age of Sigmar) (Paperback) 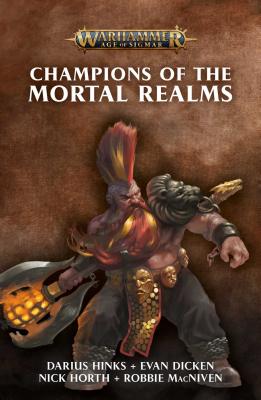 By Various
Email or call for price
Hard to Find

A fantastic anthology of stories from Warhammer Age of Sigmar.

Across the war-torn lands of the Mortal Realms, each day is a struggle for survival. Some cower behind the walls of vast citadels, while others hide in forgotten corners, hoping to remain unnoticed. But, in rare souls, the potential for greatness arises. Individuals who will be remembered throughout the ages for their deeds, their names stamped into the annals of history. Some, like Darkoath Warqueen Vedra the Sworn, must do battle with the blood-crazed warriors of Khorne even while deceit and treachery fester at the heart of her forces. Others, such as the ruthless Fleetmaster Arika Zenthe, must complete an impossible task to halt the inexorable empire-building of her hated father. At the edge of Chamon, disgraced Freeguild Captain Byrun Hess finds his new posting filled with ill-disciplined, almost heretical soldiers, but discovers that the true danger comes from an unexpected and terrifying source. While in the wastes of the Bone Desert, the heroic Gotrek Gurnisson embarks on a quest to find the mighty axe of Grimnir, but finds himself beset by an ancient enemy.

In this collection are the novellas Warqueen, Heart of Winter, The Red Hours and Bone Desert, by Darius Hinks, Nick Horth, Evan Dicken and Robbie MacNiven.

Robbie MacNiven is a Highlands-born History graduate from the University of Edinburgh. He has written the Warhammer Age of Sigmar novel Scourge of Fate and Gotrek Gurnisson novella The Bone Desert, as well as the Warhammer 40,000 novels Blood of Iax, The Last Hunt, Carcharodons: Red Tithe, Carcharodons: Outer Dark and Legacy of Russ. His short stories include ‘Redblade’, ‘A Song for the Lost’ and ‘Blood and Iron’. His hobbies include re-enacting, football and obsessing over Warhammer 40,000.

Nick Horth is the author of the novels City of Secrets and Callis and Toll: The Silver Shard, the novella Heart of Winter, as well as several short stories for Age of Sigmar. Nick works as a background writer for Games Workshop, crafting the worlds of Warhammer Age of Sigmar and Warhammer 40,000. He lives in Nottingham, UK.
Evan Dicken's first story for Black Library was ‘The Path to Glory’, and he has since penned several more tales set in the Age of Sigmar, including the novella The Red Hours, and short fiction for the anthologies Gods & Mortals and Myths & Revenants. He has been an avid reader of Black Library novels since he found dog-eared copies of Trollslayer, Xenos and First and Only nestled in the “Used Fantasy/Sci-fi” rack of his local gaming store. He still considers himself an avid hobbyist, although the unpainted Chaos Warband languishing in his basement would beg to differ. By day, he studies old Japanese maps and crunches data at The Ohio State University.

Darius Hinks’ first novel, Warrior Priest, won the David Gemmell Morningstar Award for best newcomer. Since then he has carved a bloody swathe through the Warhammer world with Island of Blood, Sigvald, Razumov’s Tomb and the Orion trilogy. He recently made his first foray into the Age of Sigmar with the novella Warqueen, and his Gotrek Gurnisson novel Ghoulslayer is due for release in the Autumn. He is also the author of the Warhammer 40,000 novels Blackstone Fortress, Mephiston: Blood of Sanguinius, Mephiston: Revenant Crusade and the Space Marine Battles novella Sanctus.