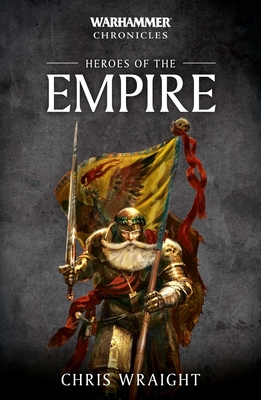 A fantastic collection of classic stories about the righteous armies of the Empire set in the Warhammer Fantasy universe.

The Empire is besieged. Countless enemies batter the border of Sigmar’s mighty nation, seeking to tear down its cities and murder its inhabitants. Standing against them are an array of brave men and women, united in their defiance and led by true heroes. In the wilderness of Averland, Kurt Helborg, Marshal of the Reiksguard, holds the province together in his iron grip. On the frontiers, Ludwig Schwarzhelm, Emperor’s Champion, must halt the unstoppable onslaught of the Greenskins, while in the Drakwald Forest, Luthor Huss, warrior priest of Sigmar, fights a tide of undead that threatens to sweep away all before it. But, more insidious enemies lurk within the shadows. Witch hunters and spies are the only remedy to such poisons, and none are more accomplished than Lukas Eichmann and Pieter Verstohlen, whose individual quests find them on the trail of ruthless murders and labyrinthine conspiracies that threaten to tear the nation asunder. Will these heroes triumph, or will the myriad evils of the Old World bring ruin to the hope of humanity?

This omnibus contains the novels Sword of Justice, Sword of Vengeance and Luthor Huss and the short stories ‘Feast of Horrors', 'Duty and Honour' and 'The March of Doom', by Chris Wraight.

Chris Wraight is the author of the Horus Heresy novels Scars and The Path of Heaven, the Primarchs novels Leman Russ: The Great Wolf and Jaghatai Khan: Warhawk of Chogoris, the novellas Brotherhood of the Storm and Wolf King, and the audio drama The Sigillite. For Warhammer 40,000 he has written The Lords of Silence, Vaults of Terra: The Carrion Throne, Vaults of Terra: The Hollow Mountain, Watchers of the Throne: The Emperor’s Legion, the Space Wolves novels Blood of Asaheim and Stormcaller, and many more. Additionally, he has many Warhammer novels to his name, including the Warhammer Chronicles novel Master of Dragons, which forms part of the War of Vengeance series. Chris lives and works in Bradford-on-Avon, in south-west England.