Visions of the Cailleach: Exploring the Myths, Folklore and Legends of the pre-eminent Celtic Hag Goddess (Paperback) 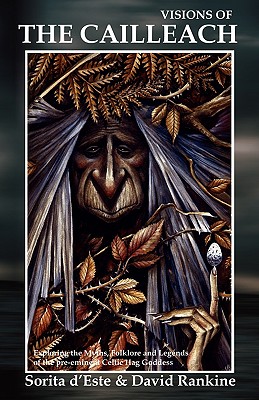 Standing astride the British landscape looms the giant blue form of the Cailleach. Whether she is seen as a benevolent earth-shaping giantess, harsh winter hag goddess, shape-shifting crone, guardian of sacred wells and animals, or ancient bestower of sovereignty; the Cailleach appears in many roles and manifestations in myths and legends across the British Isles.

The authors have tracked the Cailleach across thousands of years through folklore, literature and place names, uncovering startling references which hint at a hidden priestess cult worshipping the Cailleach from ancient times through into the twentieth century. By exploring her myths and legends, they demonstrate the hugely significant role of the Cailleach in the early history of the British Isles. The demonization of the Cailleach through the Middle Ages by the Christian Church paralleled that of women and witches, and is reflected in various other supernatural hag figures possibly derived from her and discussed in detail, such as Black Annis, Gyre Carling, Mia Lia, Nicneven and the Old Woman of the Mountain.

Looking beyond the veil of the sacred landscape, the vision of the Cailleach confronts the seeker in hills and rocks, lakes and wells, burial chambers and stormy skies. Now finally the primal elemental power of the Cailleach is revealed in her full glory, in the tales and places of Ireland, Scotland and the Isle of Man; as well as in traces of her presence in England, Wales, Jersey, Brittany, Spain and Norway. This unique and ground-breaking work brings together for the first time the wealth of folklore, stories and legends regarding this most significant of British supernatural figures, whose myths and wisdom are as relevant today as they have ever been.