Kid Jensen: For the Record (Paperback) 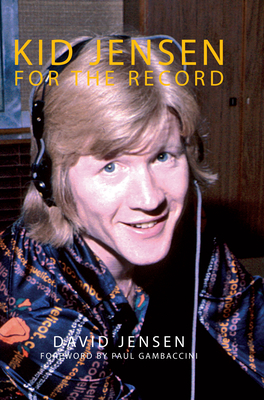 Few of a generation do not recall listening to Radio Luxembourg 'under the bed clothes'. At a time when the station was huge, David 'Kid' Jensen was one of its best-known names, broadcasting to millions across Europe, showcasing music at a key moment of change. Transferring eventually to the BBC, he was part of a golden era for Radio 1. When the station was reaching peak audiences he was on board, working alongside the radio names who have become part of folklore such as John Peel and Kenny Everett, and appearing in person in front of thousands at the Radio 1 Roadshows and on television to millions on Top Of The Pops. David Jensen's encounters with the big names are incomparable: Michael Jackson teaching the moonwalk on the shag pile carpet; playing football at midnight on an airport runway with the Rolling Stones; an exclusive party at the Holiday Inn with a young Freddie Mercury; going on holiday with Paul McCartney. As a knowledgeable and high-profile music-loving radio presenter, the list is never-ending and in this book he tells of his impressions of the characters: who was fun, and who was more difficult. Two years ago, David revealed he'd been battling incurable Parkinson's, saying he'd delayed disclosing his illness to all but family and close friends for fear that people might think less of me. This is the personal story - with all its ups and downs - of the Canadian who sold his motorbike and trumpet to venture to London to pursue his dream - and achieved it.

DAVID JENSEN was born in Canada, the son of a jazz-loving radio 'announcer'. After a spell in local radio there he pursued his dream with the huge Radio Luxembourg and then BBC Broadcasting House and Radio 1. Moving to Capital Radio in 1984, he kicked off commercial radio's network chart show which was eventually to beat the BBC's in audience. He's since worked on a host of stations such as Jazz, Smooth and BBC local radio. He lives in Surrey with his Icelandic wife Gudrun, who's been by his side since they met when she was aircrew on Iceland Air in the 70s.